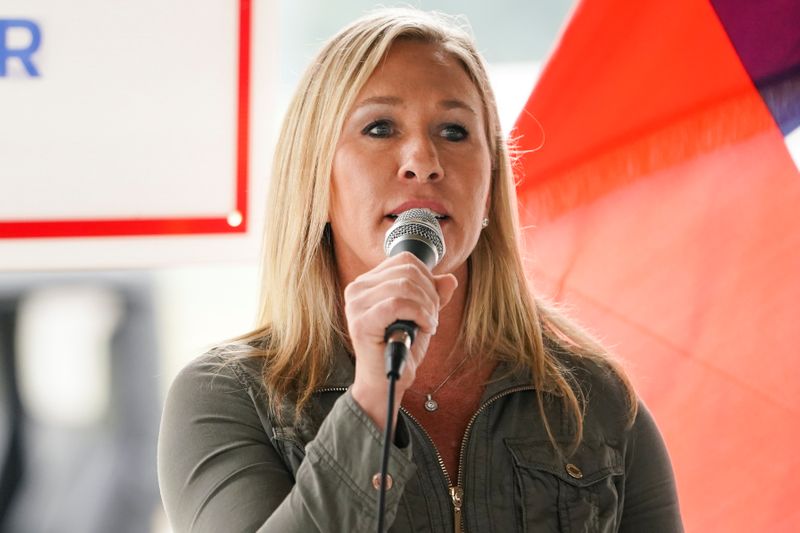 Greene’s account “has been temporarily locked out for multiple violations” of Twitter’s ‘civic integrity policy’, a company representative said in an emailed statement.

Greene accused Twitter of suppressing conservative political voices. “The borderline monopolistic stranglehold a few Big Tech companies have on the American political discourse is out of control,” she said in a statement.

Greene promoted online conspiracy theory QAnon in a 2017 video but later backtracked, saying it was not part of her campaign. She won a House seat in conservative rural northwest Georgia after her Democratic opponent dropped out.

QAnon backers have pushed conspiracies on social media that include the baseless claim that U.S. President Donald Trump secretly is fighting a cabal of child-sex predators, among them prominent Democrats, figures in Hollywood and “deep state” allies.

Twitter suspended tens of thousands of accounts primarily dedicated to sharing QAnon content after the violence in Washington earlier this month when supporters of Trump stormed the U.S. Capitol.

The attack on the Capitol by Trump supporters delayed certification of President-elect Joe Biden’s election victory by several hours that day, as lawmakers were forced to flee to seek safety from the angry mob who had overwhelmed security forces.

Five people died in the violence including one Capitol Police officer.

After the attack, Twitter removed Trump’s account, which had 88 million followers, due to the risk of further violence.

Trump, who has challenged the validity of Biden’s victory without producing evidence, initially praised his supporters but later condemned the violence.

Disclaimer: Fusion Media would like to remind you that the data contained in this website is not necessarily real-time nor accurate. All CFDs (stocks, indexes, futures) and Forex prices are not provided by exchanges but rather by market makers, and so prices may not be accurate and may differ from the actual market price, meaning prices are indicative and not appropriate for trading purposes. Therefore Fusion Media doesn`t bear any responsibility for any trading losses you might incur as a result of using this data.

Fusion Media or anyone involved with Fusion Media will not accept any liability for loss or damage as a result of reliance on the information including data, quotes, charts and buy/sell signals contained within this website. Please be fully informed regarding the risks and costs associated with trading the financial markets, it is one of the riskiest investment forms possible.

TSA weighs barring lots of from flights, steps up safety earlier than inauguration

Murray sees a silver lining at the exit from Rotterdam

According to Cramer, the post-Covid travel boom could be “the sky’s the…

According to an MSCI survey, ESG investments in…

Murray sees a silver lining at the exit from Rotterdam